Jax Taylor rocked fans with news that he and his wife, Brittany Cartwright, are not ‘returning for another season’ of ‘Vanderpump Rules’ in a lengthy Instagram post.

Jax Taylor, 40, is leaving Vanderpump Rules and his wife, Brittany Cartwright, is following suit. The longtime Bravo star — who has starred on the show for eight seasons, while Brittany has been on the show for five years — shocked fans with the news in a lengthy Instagram post on Dec. 4. “The last 8 years on Vanderpump Rules have been some of the most challenging, rewarding and fulfilling years of my life,” Jax began. He then dropped the axe: “Although this is difficult to share, Brittany and I will not be returning for another season of Vanderpump Rules.” 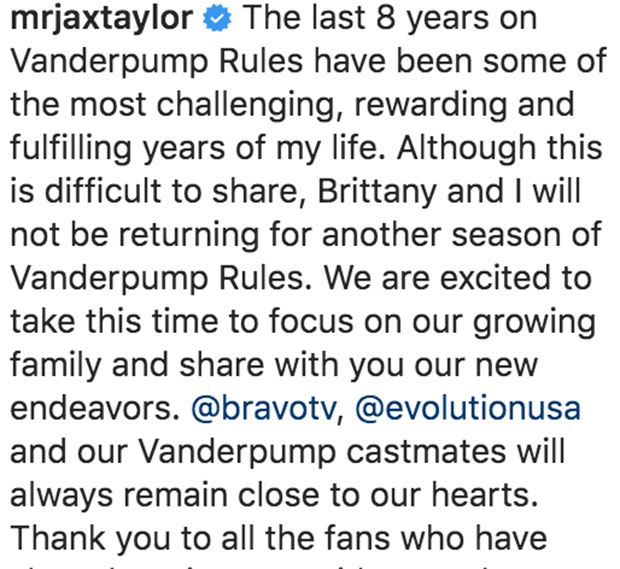 “We are excited to take this time to focus on our growing family and share with you our new endeavors,” Jax continued underneath the post, which showed various throwback photos of the Bravo star with his wife. On a final note, he wrote, “@bravotv, @evolutionusa and our Vanderpump castmates will always remain close to our hearts. Thank you to all the fans who have shared our journey with us and supported us through everything. We love you. Stay tuned, We can’t wait for to share what we have planned. Have a great weekend.”

Jax did not disclose why he and Brittany — who are expecting their first child together — are departing, and HollywoodLife has reached out to Bravo for comment. They’re the latest stars to exit the series, after Stassi Schroeder, Kristen Doute, Max Boyens and Brett Caprioni were fired from the series over separate controversies in June of 2020. However, unlike these cast members, Jax never stated he was fired.

Jax did become wrapped in his own controversy, though, due to a resurfaced racist comment on Ashley Martson‘s Instagram back in 2018. The comment was left on a photo of Ashley, 33, and her husband Jay Smith, 22, — who is Black — about the appearance of his nose. “Your mans nose is the size of his head…” Jax wrote at the time, which Ashley revealed in re-posted screenshots on June 9.

“Did y’all see bravo fired four cast members? Well @bravotv don’t leave out old Jax Taylor who harassed us when our show first aired,” the 90 Day Fiance star captioned the post. “If you don’t understand why I find this racist please watch my story. Education is key.” She went on to explain why Jax’s comment was derogatory in her Instagram stories.

“When your nose or my nose is referenced as large it’s probably just a large nose,” Ashley began her lengthy and informative post. “Black people have been historically colored to an ape or monkey, meant to be derogatory…One of the most well known racial stereotypes is referencing a black persons nose, again suggesting it is similar to that of an ape.” While some commenters appeared initially confused about Jax’s comment, Ashley was quick to clap back.

“Happy to send any literature your way from history books to help you understand as to why a white person shouldn’t EVER comment on the size of a black persons nose or lips for that matter,” Ashley posted.

When Stassi, Kristen, Max and Brett were fired earlier this summer, Bravo issued the following statement: “Bravo and Evolution Media confirmed today that Stassi Schroeder, Kristen Doute, Max Boyens and Brett Caprioni will not be returning to Vanderpump Rules.” The firings came after Faith Stowers, 31, opened up about her experience as “the only Black person” on Vanderpump Rules. In the Instagram Live video with Floribama Shore star Candace Rice, Faith described an incident which lead to Stassi and Kristen calling the police on her.

The Season 8 reunion for Vanderpump Rules aired in June of 2020, but the show has not begun filming for its next season as restaurants are currently closed in Los Angeles amid strict satefy measures to combat COVID-19. It’s unclear when the show will begin filming again.