‘The Challenge’ lovebirds, Zach Nichols and Jenna Compono, are expecting their first child! They announced their pregnancy news on Valentine’s Day 2021.

Congratulations are in order for longtime The Challenge couple Jenna Compono and Zach Nichols — they’re having their first baby! After their wedding plans for 2021 were derailed due to the coronavirus pandemic, Zach and Jenna decided to get going on started a family instead. The pair were supposed to get married on Feb. 13, but instead, they shared a pregnancy announcement — WHICH YOU CAN SEE HERE — on Feb. 14. 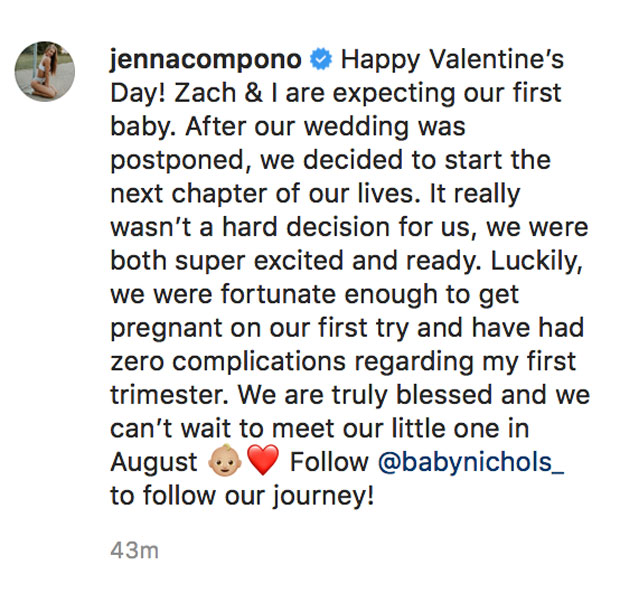 “Zach & I are expecting our first baby,” Jenna wrote on Instagram. “After our wedding was postponed, we decided to start the next chapter of our lives. It really wasn’t a hard decision for us, we were both super excited and ready. Luckily, we were fortunate enough to get pregnant on our first try and have had zero complications regarding my first trimester. We are truly blessed and we can’t wait to meet our little one in August.”

The reality stars met when they were both on The Challenge: Battle of the Exes, which filmed in 2014. Their relationship has gone through a lot of ups and downs in the public eye over the years. While filming The Challenge: Rivals III in 2016, Jenna found out that Zach was cheating on her back home. However, when they reunited on The Challenge: Champs vs. Stars during the summer of 2017, they reconnected.

When filming of the spinoff show concluded, Zach and Jenna got back together, and have been going strong ever since. Of course, having their love life on a reality television show has not been easy. In fact, when Jenna was on The Challenge: Total Madness, which was filmed in the fall of 2019, she almost left the game due to tension with Zach, who was back home. Once she was eliminated and returned home, though, they fixed their issues and got engaged just before Christmas 2019. Jenna has since moved to Michigan to live with Zach, where they’ve started their life together!