Britney Spears shared rare photos with her teenage sons Sean and Jayden, revealing to fans how ‘lucky’ she is that her ‘babies’ have grown into such ‘kind gentlemen.’

Britney Spears almost never speaks out about her two sons Sean Preston, 15, and Jayden James Federline, 14, as she prefers that they’re able to live a private life out of the spotlight. But the pop superstar let fans in on what amazing young men they are growing into via the caption of two photos showing the teens now taller than mom. One of the boys had previous shared the photo last week, which was captured by a fan account. Britney posted the same photo to her account on Mar. 1, along with the same shot featuring a Photoshopped wild, fiery sunset in the background in place of the bluebird hiking day.

“It’s so crazy how time flies…My boys are so big now!!!! I know…I know…it’s very hard for any mama especially a mama with boys seeing them grow up so fast!!!! Talk about enough to make you go to your knees…GEEZ!!!!” she marveled about her growing young men. The last time fans saw the three out at a public event was when Britney brought her then little boys to the 2013 Smurfs 2 red carpet premiere in L.A. They were still waist-high to her at the time.

The 39-year-old then gushed about how amazing her two sons with ex-husband Kevin Federline, 42, have turned out. “I’m extremely lucky because my two babies are such gentleman and so kind that I must have done something right!!!!” she said of Sean Preston and Jayden James. JJ was born on Sept. 12, 2006, and less than two months later Britney filed for divorce from Kevin on Nov. 7, 2006 after barely two years of marriage. 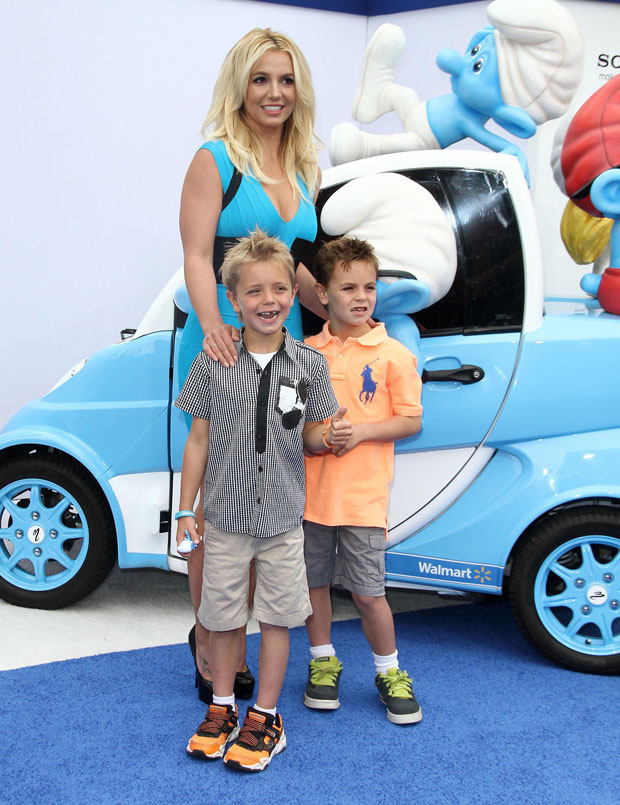 The last time Britney Spears took her sons to a public event, they were still little boys. She’s seen with Jayden on the left and Sean on the right at the ‘SMURFS 2’ premiere in Westwood, CA on July 28th, 2013. Photo credit: MEGA.

Britney then explained why she hasn’t shared any family photos in so long showing her sons. “I haven’t posted pictures of them for some time cause they’re at the age where they want to express their own identities and I totally get it,” the “Til The World Ends” singer shared. It turns out that Brit’s Photoshopping skills to make the hiking photo on a clear blue day way more dramatic was what made her boys give the okay to post it to her page.

The first photo showed the sky on fire with bright orange and yellow sunset clouds behind them, while the original family photo appeared with a swipe right. “But I went out of my way to make this cool edit and guess what….They’re finally letting me post it!!!” Britney excitedly exclaimed, then sweetly added, “Now I don’t feel left out anymore and I’m gonna go celebrate….Oh sh*t I guess cool moms don’t do that…Ok I’ll just read a book instead.”

Brit’s fans went wild that she was sharing such a precious photo and proudly gushing about her sons. User @sarifabio marveled, “Omg time does fly!!!” while @arianaatourss exclaimed, “OMGGG!!! They got SOOO BIGG.” Fan @stellaafusaro assured the singer, “You’re a cool mom Britney,” and user @cholaspears agreed, writing, “Love the photo edit! & I bet you’re the coolest Mom!” Fan @britneyz.spears spoke for many with the comment, “this makes me so happy,” seeing Britney smiling next to her beloved sons.