Now this is a happy rarity. Britney Spears is seen in a new photo beside her beloved teenage sons, and her boys are already taller than their mom in the sweet family snapshot.

It’s been a very long time since Britney Spears has been seen in a photo with her two sons, and they’re all grown up! The singer appeared to have gone on a recent hike with Sean Preston, 15, and Jayden James Federline, 14, as they stood in the bright blue sunshine of a canyon that appears to be near Britney’s Thousand Oaks, CA neighborhood. Britney, 39, looked overjoyed to be with her boys, who are both now taller than their 5’4” mom.

Britney could be seen wearing the same grey track shorts with white trim that she had on in the Valentine’s Day tribute that boyfriend Sam Asghari, 27, shared in a Feb. 14 IG photo. She added a dark grey t-shirt and athletic shoes, and wore her blonde locks free and loose. Brit added dark sunglasses and pulled down her face mask to show off her gorgeous smile. Her outfit and the scenery around her was nearly identical to that seen in a Dec. 6, 2020 Instagram post, where Britney was hiking near her home. Someone else had taken the photo, so maybe it was one of her son’s behind the camera.

The trio must have been near a travelled hiking path, as both Sean and Jayden remained masked up. Both boys wore black track pants and trainers, while Sean donned a white t-shirt with an unzipped black patterned jacket. JJ wore a blue unbuttoned shirt with a light blue collar and a white tank underneath it.

It’s a delight to see Britney and her boys together and happy, as the recent New York Times Presents: Framing Britney recounted their early years amid an initial custody battle Brit had with ex-husband Kevin Federline that led her into a dark and heartbreaking period of her life. After her conservatorship was created in 2008, Britney and Kevin split custody 50/50, but in 2019 it changed to 70/30, with the teens spending more of their time living with their 42-year-old father. 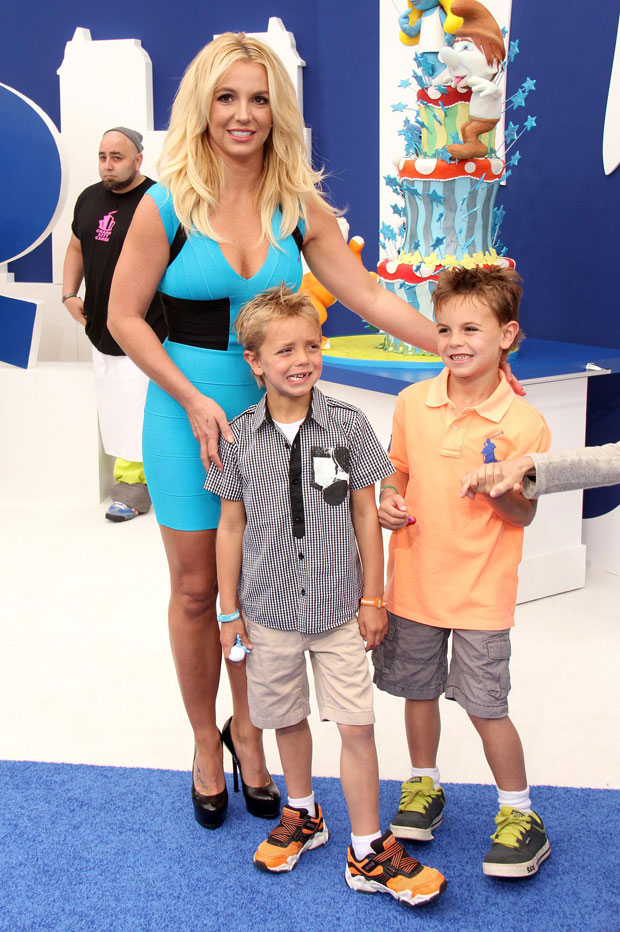 My how they’ve grown! Britney’s sons were still little boys when she brought them to the ‘SMURFS 2’ premiere in Westwood, CA on July 28th, 2013. Photo credit: MEGA.

Jayden made headlines on March 3, 2020 when he did an Instagram live video and spilled a whole lot of tea about his mom’s personal life. He revealed how much he really hates his grandfather and Brit’s co-conservator dad Jamie Spears, 68, that he likes his mom’s boyfriend Sam, and in the most frightening news for her fans, said that she might be quitting music.

Jayden called Jamie “a jerk” and said “he’s a pretty big d*ck.” He also said of his grandpa, “he can go die.” As for Sam, Britney’s youngest son revealed, “I like Sam. He’s good. He’s nice. He’s a really good dude.” But what he had to say about Britney returning to her music career had fans shook.

Jayden said, “Actually, I haven’t seen her doing a lot of music at all. I don’t think that…I don’t know, dude. I don’t even know. I remember one time I asked her, I said, ‘Mom, what happened to your music?’ and she was like, ‘I don’t know, honey. I think I might just quit it.’ I’m like, ‘What? What are you saying? Like, do you know how much bank you make off of that stuff?’”

Since that time, it was revealed by Britney’s attorney Samuel D. Ingham III in a Nov. 11, 2020 conservatorship hearing that she will not return to the stage until her dad is removed as her co-conservator. Ingham told the court, “My client has informed me that she is afraid of her father. She will not perform again if her father is in charge of her career.”